Thanks to a LocalConnection API put in place by Nicolas Cannasse the developper of the game, i could communicate a bit with the game. This was my entrance door to create all that (big) stuff.
The application could now know where the player is inside the world. And thanx to a small JS hack it could also know where player makes some specific action.

The application is built around four main blocks, the quest editor, a frontend, a backend, and a greasemonkey script : 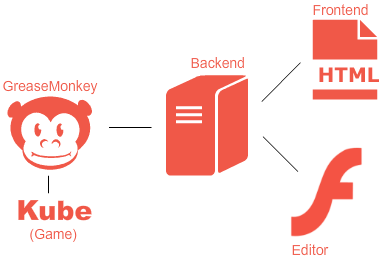 This is from far the biggest piece of the project.
It allows to anyone to create quests by, basically, connecting nodes together. Each node can be a dialogue or an item that the player will get or will have to use on a specific place. Above that there are many other options to allow the player to make choices, to display events only at specific moments, play sounds, earn/spend money, etc...
The editor also allows to add/edit/remove characters and objects and provides a "debugging" tool to test our quests' logic without having to play it in real conditions which would be a nightmare.
Watch how the editor works to create a simple quest :

The frontend simply lists all the quest created by the community.
It has 4 main parts which are : The quest's details page has some JS detection to check if the browser has the greasemonkey plugin installed, if not it automatically displays the appropriate links to install it depending on the current browser.

It simply exposes some services to save a quest from the editor to the DataBase as well as the players progressions while they are playing a quest. It also exposes two services to search and load quests as they are actually loaded through AJAX on the frontend. Finally it manages the OAuth authentication and redirections.

This is the "key" part of the project as it is what makes a quest playable right from the game's page.
It actually includes a flash module right under the game. It also grabs some information from the DOM's page like the current user ID and names as well as a the 3D coordinates of a specific user action that can be done in game. 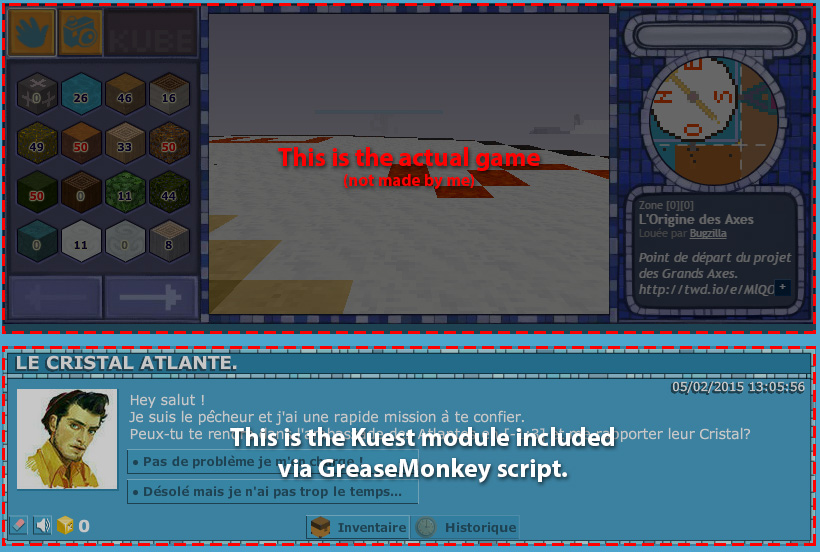 An error has occurred.

The content you requested hasn't been found or is not available for now.

Hello, i'm François Dursus, i'm 37 years old, i'm french, i live in Paris and i like creating things with help of programming.

I love making useless, fun, creative, useful or stupid stuff and i always do it with much love as long as I like the idea!


If you have any question, request or a deep need to tell me how much you love me, feel free to fill the form below !